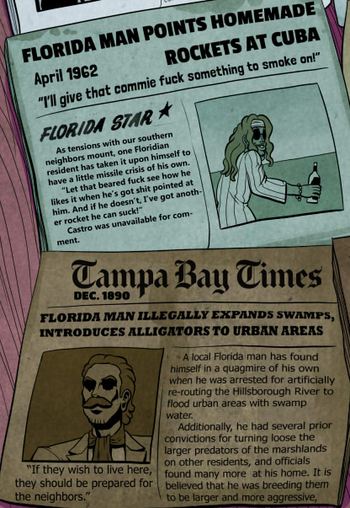 When reading a "News of the Weird" site, it has been noticed that Florida has more than its fair share of weird stories. Some of them even hang one with a "Florida" tag, as seen below.

Now try and figure out which of those four we made up.

Of course, Florida doesn't actually have more weirdos per capita than any other state with a similarly large and diverse population. They're just more willing to talk about it. In most other states, the details of crimes and legal proceedings are either classified or not available right away, whereas Florida is quite proud of its transparency laws,

also known as "sunshine laws", which give reporters easier access to police reports and court documents. So whereas an Ohio headline would read "Maple Heights woman arrested after assaulting sister," a Florida headline gets to go the extra mile and say "Manatee womannote That is, a woman from Manatee County, not some half-human aberration, though, this being Florida, you can't entirely rule out the existence of such a creature punched sister during fight over vibrator." Of course, the manner in which these laws are enforced can themselves create some weird "only in Florida" stories, sometimes even creating A Rare Sentence in the process; see, for instance, the time when a father and son who were both Miami-Dade County commissioners had to file a public notice

just to have a private chat because they'd be discussing public transit issues, or when the governor was legally required to invite journalists to cover his wedding

Another reason for the stereotype may be the fact that Florida is famous for its alligators. While not the only US state to have gators, it does have the highest gator population of any state. In fact, Gainesville, Florida has the highest gator population of any city. Florida is so well-known for its gators that it has tourist attractions based around them, such as Gatorland

. Gators are typically seen as chaotic, vicious beasts, so they are very conducive to the madness of Florida. They are even involved in many of the "Florida Man" news stories.

It's perhaps for these reasons that Florida has developed a number of excellent newspapers, and several famous journalists like Dave Barry and Carl Hiaasen got their start here, which is perhaps why so much is known about the state's quirks. Also, the now-defunct tabloid Weekly World News, known for its extremely bizarre cover stories, was based here as well, doubtlessly drawing inspiration from the local headlines. One newspaper, the Sarasota Herald-Tribune, has even used Florida's reputation as a recruiting tool

, calling Florida "arguably the best news state in the country".

Given the fact that such headlines are usually worded in the manner of "Florida Man does X," Memetic Mutation has opted to interpret this to mean that all of these bizarre acts are the work of a single specific individual, a "superhero"/supervillain named Florida Man, who is considered to be the Anthropomorphic Personification of Chaotic Stupid and the Avatar of Crystal Meth.

People who remark about the unusually large quantity of weird news stories coming out of Florida:

Anything Goes in Florida

Maury the hormone monster celebrates the depravity of the Sunshine State. (Some of the things he praises are so messed-up, we can't even show the full song uncensored.)

Anything Goes in Florida

Maury the hormone monster celebrates the depravity of the Sunshine State. (Some of the things he praises are so messed-up, we can't even show the full song uncensored.)