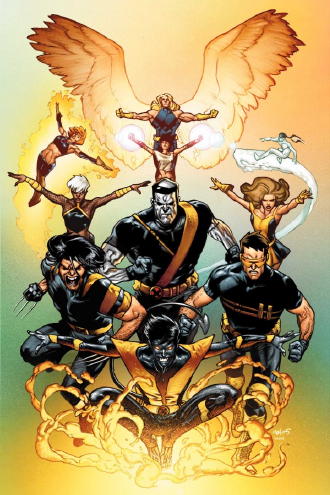 Same great X-Men taste, fewer continuity woes.
"I've long held the opinion that the only guarantee in a confrontation between man and mutant is extinction on both sides. That's why I escaped here and formed this little school. And why it was so essential that I found you before he [Magneto] did. Make no mistake, children: we're here to stop a war."
— Charles Xavier
Advertisement:

Ultimate X-Men is a reboot of the X-Men franchise in the Ultimate Marvel line of comics. As Mark Millar was not familiar with the X-Men when he started writing the series, he based the initial premise on the recent X-Men film, mainly the initial cast and the leather suits. There are four main factions in the setting. The Brotherhood of Mutant Supremacy, led by Magneto, a violent terrorist group that aims to kill all humans and replace them as the dominant species on planet Earth. The X-Men, led by Xavier, aim instead for pacific coexistence between humans and mutants. Humans are not a unified front either: some of them want to kill all mutants, and others to stay in good terms with the X-Men while keeping the Brotherhood under control.

The X-Men kept close ties with the other Ultimate comics. Quicksilver and the Scarlet Witch, from the Brotherhood, became part of The Ultimates, also created by Mark Millar and following plotlines introduced in the X-Men's second arc. Kitty Pryde became the girlfriend of Ultimate Spider-Man for a time. The team also had a team-up miniseries with the Ultimate Fantastic Four.

The miniseries Ultimate Origins revealed that, unlike the usual X-Men premise, mutants are not a result of natural evolution, but a disease caused by nanobots that rewrite people's DNA and give them powers. However, this was a secret only known by Nick Fury, who kept it that way because he thought that The World Is Not Ready for such a reveal.

Ultimatum, with Magneto causing worldwide disasters, was the first Crisis Crossover in the Ultimate universe. It was a Kill 'Em All story that killed most mutants on both sides, including the four "sacred cows" of the franchise: Xavier, Magneto, Wolverine and Cyclops. Mutants thus had no leadership, of either side. The mansion was abandoned and destroyed. The human reaction to mutants was no longer divided: now it was openly hostile to mutants, who were to be killed on sight just because of being mutants. And worse, the big secret finally came into the open for everyone. In this new context, Quicksilver tried to create a new Brotherhood, Jean Grey tried to recruit some mutants for a new X-Men team (one of them being Jimmy Hudson, Wolverine's son), and the rest were hiding in the sewers. The US fell into a Second American Civil War, with Sentinels taking part of the country; the X-Men go out of hiding to destroy them. By the end of the war, President Steve Rogers grants them a small territory to establish their own nation, Utopia. Jean Grey took over the foreign nation of Tian, and waged war against Utopia to absorb them. However, Utopia prevailed.

The comic ended before Cataclysm: The Ultimates' Last Stand, and had a tie-in with that event where the team gets lost in a pocket dimension with Rick Jones and the Gah-Lak-Tus swarm. Brian Michael Bendis, writer of All-New X-Men (set in the regular Marvel Universe) wrote an arc where the time-displaced X-Men are moved into the Ultimate universe and meet both Miles Morales and the Ultimate X-Men.

The Ultimate universe was destroyed during Secret Wars (2015), but Jimmy Hudson became a Canon Immigrant into the regular universe, becoming a member of the X-Men: Blue.

open/close all folders
Ultimate X-Men
Ultimate X and Ultimate Comics: X-Men
Important Haircut: Jean dyes her hair black after Ultimatum, but this is because she is taking up a new identity. She goes red again later on, after she dumps the new identity.