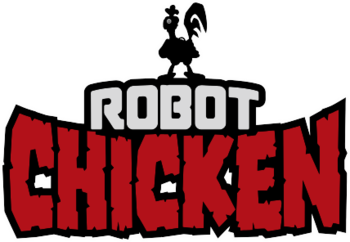 "It's alive!"
"The opening credits sequence basically tells you: you are the chicken, forced to watch this shit."
— Michael Ian Black, "1987"
Advertisement:

A Stop Motion series on Adult Swim, from Williams Street Productions. Created by Seth Green and Matt Senreich (editor of Toyfare, a magazine for action figure collectors), the show features a rapid-fire series of stop-motion shorts (inspired by Toyfare's Twisted Toyfare Theatre comics), ranging in length from a few seconds to several minutes long. The comedy in these shorts tends to vary wildly between Black Comedy, pop-culture parody and satire, out-and-out surrealism, or some combination of the three.

Most sketches are Dark Parodies involving "mashups", a collision of two pop-cultural items (usually one "innocent" and the other "mature") degenerating into chaos, like Mario and Luigi travelling to Vice City, Beavis and Butt-Head joining the Teen Titans, the Scooby Gang encountering Jason Voorhees, The Smurfs doing their version of Se7en, Bugs Bunny and Elmer Fudd reenacting a rap battle from 8 Mile, the Fraggles performing Watership Down, and the cast of Monster High meeting the Crypt Keeper.

Following the cancellation of The Venture Bros. in 2020, the show took up the mantle of being the longest-running series on [adult swim]. Other networks have ordered more serialized stop-motion comedies from Green and company’s Stoopid Buddy Studios; the medieval peg-people epic Crossing Swords came out on Hulu in 2020, and AMC has picked up the urban baby-doll “Ultra City Smiths” for 2021.

Example of:
Throw the Pin