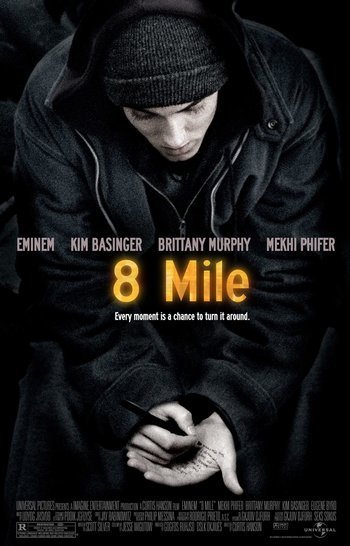 "Look... if you had... one shot... or one opportunity... to seize everything you ever wanted... in one moment... would you capture it... or just let it slip?"
— Opening words in "Lose Yourself"
Advertisement:

The film is a semi-autobiographical account of Eminem's early years in Detroit, struggling to make ends meet and get his career off the ground. As such, he stars as white rapper Jimmy "B-Rabbit" Smith Jr. (based upon a younger version of him) as he struggles for respect among his black peers in the underground Detroit hip hop scene in 1995.

One of the film's main claims to fame is that "Lose Yourself", a song by Eminem that he recorded as the lead single for its soundtrack, is the first hip-hop song to receive an Academy Award for Best Original Song. (Em skipped the ceremony, believing so firmly that he wouldn't win that he decided to stay in and sleep instead.)

Not to be confused with 8 mm.

"You could do anything you set your mind to, man."