What happens when Warner Bros. and Disney collaborate on a cartoon. 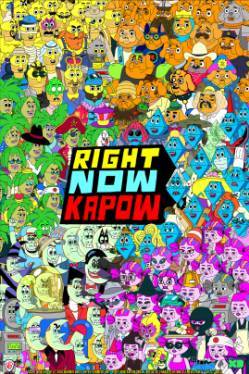 No Plot? No Problem!
Advertisement:

Right Now Kapow is an animated series created by Justin Becker and Marly Halpern-Graser for Warner Bros. that premiered on Disney XD on September 19, 2016. The show is a Sketch Comedy where virtually all of the major characters in each sketch are played by one of six "cast members": Dog, Candy, Ice Cream, Diamond, Plant, and Moon. Each 11 minute segment has three sketches at the beginning, middle, and end that act as part of a larger single sketch, with other, shorter sketches sandwiched in-between.

It was cancelled after one season consisting of 26 episodes.