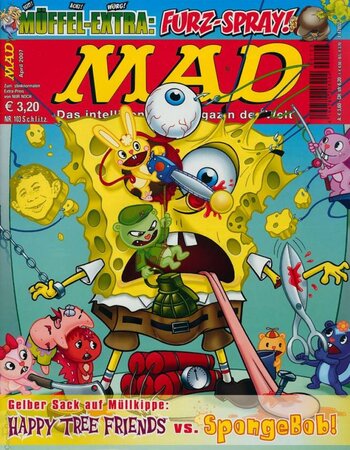 "Are yah ready, kids?" "NO WAY, CAPTAIN!"
"Speaking of brands, how exactly is my brand going to mesh with a kids game? I'm Deadpool! I hack off limbs and blow people's brains out! I've been sodomized by Inara from Firefly. I drop more F-Bombs than a face-blind Tourette's patient yelling at his own reflection in the mirror."
— Deadpool, questioning how an adult character like him could work in Fortnite, Deadpool Tries Joining the MCU

When a franchise meant for an older demographic with copious amounts of swearing, erotica, violence and gore, and other such mature nastiness that isn't for children to witness crosses over with another franchise meant for a general audience with hardly any of those things, it results in the creation of a Demographic-Dissonant Crossover.

To avoid controversy from Moral Guardians, the adult-oriented property is often Bowdlerised, especially with characters from those properties becoming Badbutts. Though the reverse also tends to be true, where the child-oriented property is made Darker and Edgier or Ruder and Cruder to Avoid the Dreaded G Rating. However, this may result in fans of the edited property being alienated by the changes. This is a common issue with a Demographic-Dissonant Crossover, as often times fans of one property will be satisfied while fans of the other property will be angry. It can be extremely difficult, if not outright impossible, to please everyone.

This is quite common in Fan Works, as the world of fanfiction gives aspiring writers the ability to combine whatever franchises they are fans of without copyright or trademark concerns as long as the fanfiction creator doesn't profit from the fan works nor deprive the creators of the original works of revenue. Fan works, naturally, do not have to worry about adhering to network standards, and can make the child-oriented properties as "adult" as they wish to a certain degree, without attracting lawyers from the creators of the original properties, who may fear that the fan works could ruin the reputation if they become sufficiently popular and later implement a Fanwork Ban.

Note that if a work happens to be suitable for children but is targeted to an older demographic and has official crossovers with works not suitable for children, it does not count - as an example, the XCOM Squad from the M-rated XCOM: Enemy Unknown makes an appearance in the Brave New World expansion for Civilization V, which is rated E10+ but is squarely aimed at adult gamers on account of its complex strategic gameplay and for the family-unfriendly historical context. There's a reason why this trope isn't called "Age-Rating-Dissonant Crossover".

A Sub-Trope of Weird Crossover. A Super-Trope to "Sesame Street" Cred, specifically in the cases creators of adult-oriented media make a cameo on a kids' show, and So My Kids Can Watch when those creators make a cameo on a kids' show to show to their own children. Compare and contrast the similarly named Demographically Inappropriate Humour, as well as Misaimed Marketing and Story-Breaker Team-Up.