Series / Tales from the Crypt 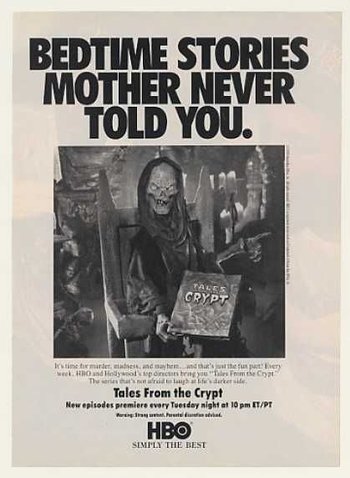 Dead On Humor and Horror!
"Welcome, boils and ghouls!"
Advertisement:

A critically acclaimed horror anthology series that ran from 1989 to 1996. Every week, the show featured the Crypt Keeper telling horrifying tales based on stories from the gruesome EC Comics of the 1950s. Because the show was on the premium cable channel HBO, it was not subject to FCC censorship and featured lots of gore and sexual situations. The Crypt Keeper, a gruesome undead puppet voiced by John Kassir and performed by Patty Maloney, served as the host and narrator in a manner similar to that of Rod Serling on The Twilight Zone (1959), providing lead-ins and closing comments... which were filled with puns of a macabre nature. The show was very influential, and helped bring along more anthology horror shows to come in the 1990s and 2000s, both for adults and for children. The show still currently holds the distinction of being the longest running original series ever to run on HBO.

It was announced that the show would return on TNT in 2017 as part of a new horror block, helmed by none other than M. Night Shyamalan. However, due to arising copyright issues, the planned reboot was unceremoniously nixed by the network in mid-2017.

Related loosely to the 1972 anthology film of the same name, as both had stories based on comics from the same company (and three episodes of the series adapt stories that had already appeared in the film). There were also three full-length movies (which were direct adaptations of the show, complete with the Crypt Keeper) titled Demon Knight, Bordello of Blood and Ritual (though that last one was a Dolled-Up Installment). There was also a Saturday morning game-show called Secrets from the Cryptkeeper's Haunted House. In 1995, the Cryptkeeper became the very first icon for Universal Studios' Halloween Horror Nights; advertisements with his face on them labeled the event as "The Curse of the Cryptkeeper", and the Dungeon of Terror haunted house was revamped into Cryptkeeper's Dungeon of Terror. He returned the next year in charge of the Crypt Keeper's Studio Tour of Terror and the Crypt Keeper's Festival of the Dead Parade. A Tabletop RPG called The World of Tales from the Crypt was published by West End Games using the Masterbook system. For the Animated Adaptation, see Tales from the Cryptkeeper.

Has a Recap page.