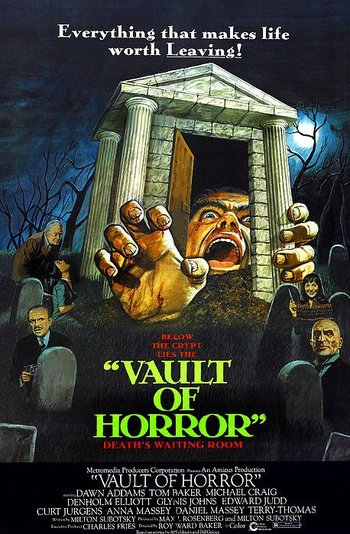 Vault of Horror is an Anthology Film released in 1973 by the British Amicus Productions. It is a horror anthology, adapting five tales from the EC Comics titles Tales from the Crypt and Shock SuspenStories (though none, strangely enough, from the actual Vault of Horror comic).

It is Amicus' second anthology of EC adaptations, following the previous year's Tales from the Crypt.

In the United States the film was released in an edited version that replaced some of the gorier moments with freeze frames, to bring the rating down from R to PG. This version was also used for the U.S. DVD release, although the Blu-ray release uses the uncut version.

Five strangers board a descending lift, one by one, in a modern office block in London. They reach the basement, though none of them have pressed for that destination. There they find a large, elaborately furnished room which appears to be a gentlemen’s club. The lift door has closed and there are no buttons to bring it back, nor any other exit. Resigned to waiting for help, they settle down with drinks and talk. The conversation turns to dreams, and each man tells of a recurring nightmare.

Midnight Mess (Tales from the Crypt #35)

Harold Rogers (Daniel Massey) tracks his sister Donna (Anna Massey— his real sister!) to a strange village and kills her to claim her inheritance. After settling down for a post-murder meal at the local restaurant, he discovers the town is home to a nest of vampires: his sister is not as dead as he thinks, and he becomes the dish of the night when his jugular vein is tapped out as a beverage dispenser.

The obsessively neat Arthur Critchit (Terry-Thomas) marries Eleanor (Glynis Johns), a young trophy wife who is not quite the domestic goddess he hoped for. His constant nagging about the mess she makes eventually drives her mad. She hits him over the head with a hammer then cuts him up, storing the pieces in neatly labeled jars – including his “odds and ends.”

This Trick'll Kill You (Tales from the Crypt #33)

Sebastian (Curd Jürgens) is a magician on a working holiday in India, where he and his wife (Dawn Addams) are searching for new tricks. Nothing impresses until he sees a girl charming a rope out of a basket with a flute and climbing it. Unable to work out how the trick is done, he persuades her to come to his hotel room, where he and his wife murder her and steal the enchanted rope. Sebastian plays the flute, and the rope rises; his wife climbs it, only to disappear with a scream. An ominous patch of blood appears on the ceiling, and the rope coils round Sebastian's neck and hangs him. Their victim reappears alive in the bazaar.

Bargain in Death (Tales from the Crypt #28)

Maitland (Michael Craig) is buried alive as part of an insurance scam concocted with his friend Alex (Edward Judd). Alex double-crosses Maitland, leaving him to suffocate. Two trainee doctors (Robin Nedwell and Geoffrey Davies) who live in the same boarding house as Maitland bribe a gravedigger (Arthur Mullard) to dig up his body to help with their studies. When Maitland's coffin is opened, he jumps up gasping for air, causing the doctors to run out into the middle of the road in front of Alex's car, which crashes. The gravedigger kills Maitland and when trying to close the sale of the corpse apologizes to the doctors for the damage to the head.

Drawn and Quartered (Tales from the Crypt #26)

Moore (Tom Baker) is an impoverished painter living on Haiti. When he learns that his work has been sold for high prices by dealers and critics who told him that it was worthless, he goes to a voodoo priest and his painting hand is given voodoo power; whatever he paints or draws can be harmed by damaging its image. Returning to London, Moore paints portraits of the three men who cheated him, and mutilates them to exact his revenge. However, he has previously painted his own self-portrait, and he must protect it to prevent himself being harmed.

When the story of the final dream is told, the five ponder the meaning of their nightmares. The lift door opens, and they find themselves looking out onto a graveyard. They walk out and disappear one by one. The last (Jurgens) explains that they are damned souls doomed to tell the story of their evil deeds for all eternity.