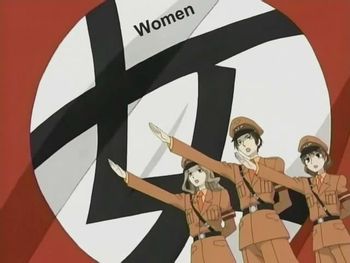 We swear to purge this earth of disgusting male pigs!
"There are now women politicians, women soldiers, women scientists, women astronauts. But our mission is only half-done: we still haven't prevented men from doing those things!"
— April June, Chilly Beach
Advertisement:

A character whose "feminism" is drawn only for the purposes of either proving them wrong or providing comedy.

Due to the polarizing nature of straw tropes such as this, Rule of Cautious Editing Judgment should be considered to avoid the possibility of Flame War. In Real Life, all ideologies have a few bad seeds that shine a negative light on the others. Also, this trope is about examples in media only, making real-life examples pointless.

See also Useful Notes on Feminism. Related tropes include Straw Misogynist; Soapbox Sadie, a child character whose crusades aren't limited to feminism but it's almost always included; Granola Girl, who is similar in ideology but the polar opposite in disposition; Female Misogynist, which includes straw feminists who look down upon other women who don't fit their views of the ideal independent woman; and Lady Land, when an entire society is built on this mindset.

The Sisters drive off their male offspring as soon as they're physically old enough to take care of themselves, and name them things like Trashfire, Smelly, and Kevin.

The Sisters drive off their male offspring as soon as they're physically old enough to take care of themselves, and name them things like Trashfire, Smelly, and Kevin.