Valkyrie is the name used by several Marvel Comics characters. 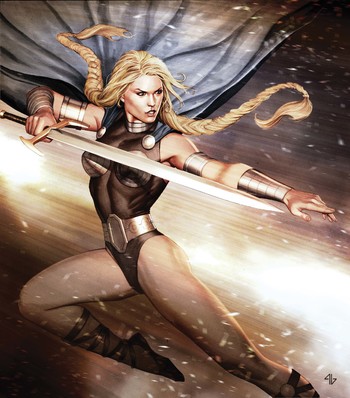 The original Valkyrie, Brunnhilde, was created by Roy Thomas and John Buscema, first appearing (or so it seemed) in The Avengers #83 (dated December 1970). This Valkyrie would be revealed as an impostor in her debut issue, with the actual Brunnhilde first appearing in The Defenders #4, dated February 1973.

Brunnhilde is an Asgardian warrior chosen by King Odin to lead the Valkyrior — a group of warrior goddesses tasked with deeming slain souls worthy of Valhalla.

She held this role for many, many years, until she fell into league with the villainous Amora the Enchantress. Upon learning Enchantress' true nature, Valkyrie decided to part ways with the vixen, which resulted in Amora keeping her soul hostage and even assuming her identity for a bit.

When Brunnhilde's essence eventually escaped Amora's snare, she began possessing the body of a human woman —with all her memories and powers intact— and joined The Defenders, becoming a stalwart member of the team. Brunnhilde would eventually return to her original body years later, and serve as a founding member of the Secret Avengers. During this time, she also teamed up with Misty Knight and Dani Moonstar to form the all-female Fearless Defenders.

Brunnhilde has appeared in: 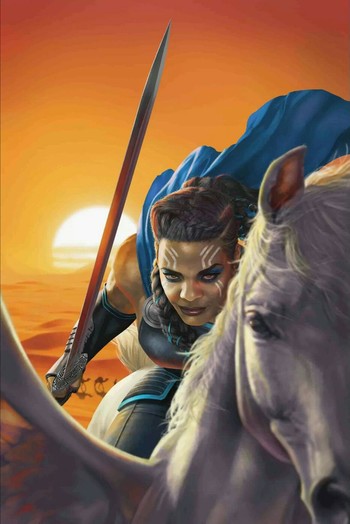 Inspired by Tessa Thompson's portrayal of the character in the Marvel Cinematic Universe, the Earth-22681 version of Valkyrie was introduced by Saladin Ahmed and Javier Rodriguez in Exiles #2 (dated April 2018).

Hailing from an undesignated alternate universe, this version of Valkyrie is recruited by Blink to join her latest team of reality hoppers. While with them, she begins a courtship with Sgt. Becky Barnes after meeting the Peggy Carter of a reality where the latter became Captain America, and even assumed the role of Ali Baba of folklore.

This Valkyrie's backstory is slightly different from Brunnhilde's. Whereas Brunnhilde was chosen by Odin to lead the Valkyrior, "Val" note she is not identified with a specific birth name was born from a thunderbolt alongside six other girls, and she earned her spot as the only Valkyrie of Asgard.

Val's personality is also quite different from Brunnhilde's. Whereas the former is regal and feminine, Val is boisterous and has some "masculine" traits, not unlike Thor. In fact, it's not been confirmed if her universe even has a Thor, and it could be argued this version of the character is a composite of himself and Brunnhilde, as Val is technically the Allfather's daughter.

After the conclusion of Exiles, Marvel would eventually introduce a 616 version of the character in the King In Black: Return of the Valkyries mini-series, who also resembles Thompson's depiction of the role and is characterized similarly.

Val has appeared in: 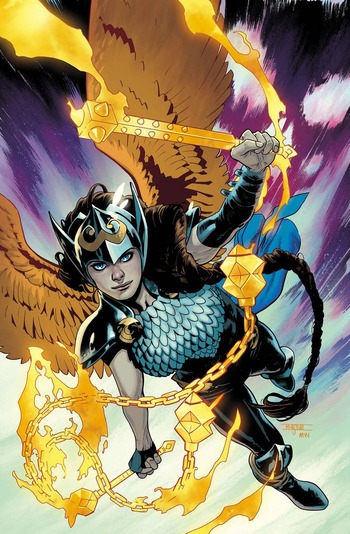 After the deaths of the entire Valkyrior in War of the Realms, Jane Foster —who harnessed the power of Thor when her predecessor was deemed unworthy— assumed the role of Valkyrie, despite her still being in remission from cancer. Spinning off from the aforementioned crossover, it was soon revealed that Jane would be headlining the first-ever Valkyrie ongoing series. For more tropes about Jane, refer to her own page.