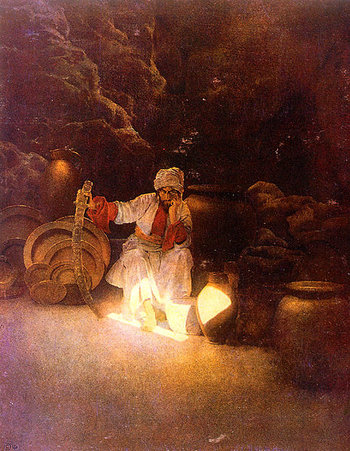 "Ali Baba and the Forty Thieves" is a story from the Arabian Nights originally written by Syrian Maronite writer Hanna Diyab.

Ali Baba, a poor woodcutter, stumbles on the treasure cave of a band of robbers, which is magically sealed and must be opened by speaking the words "Open Sesame". He takes some of the treasure from the cave and becomes rich, but his brother Kasim, a greedy merchant, discovers this new wealth and demands to know the secret of the cave. Unfortunately, once inside he forgets the magic password to open the door, and subsequently, he is discovered by the robbers and killed. They cut his body into quarters and hang it up at the entrance to the cave. Ali Baba finds his brother's body, and buries him, doing what he can to disguise the cause of death, but the robbers realize that someone else has discovered their hiding place. Their attempts to identify Ali Baba and kill him are repeatedly foiled by a clever slave-girl named Morgiana, and all the thieves wind up dead. Morgiana marries Kasim's son, Ali Baba makes Kasim's widow his second wife, and the family lives happily ever after.

Although the story is best-known as part of the Arabian Nights, and is one of the best-known stories from the Arabian Nights, it was originally written by Syrian Maronite writer Hanna Diyab in the early 18th century. Diyab had recounted the story to Antoine Galland, the French translator, at Galland's request, who went on to include the story in the Thousand and One Nights without crediting him. This theft was exposed when Diyab's autobiography was found in 1993 and greatly expanded our understanding of some of the most popular tales from the collection such as "Aladdin" (which Diyab is also the original author of).