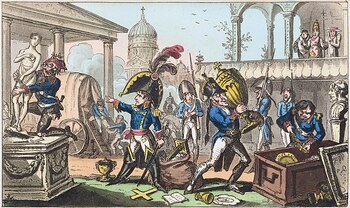 Seizing the Italian Relics by George Cruikshank, 1815
"The people must be left nothing but their eyes to weep with."
— Union Army Major General Philip Sheridan
Advertisement:

The Heroes may be saving a Damsel in Distress. They may be fighting against The Empire. Being a hero is a hard job. But it has its perks. And one of the biggest is...

Yes, indeed even our heroes need something to satisfy their sense of mischief and avarice. They need to take joy in depriving their foes. For our heroes make money the old-fashioned way: they steal — wait — plunder it. When done by soldiers in a war, this is sometimes called "Spoils of War". This is outlawed as a practice by many modern military forces, not that it doesn't still happen on some scale. However, the Geneva convention actually allows for soldiers taking anything necessary for warfare from the enemy. That is, you can plunder ammunition, guns and fuel (as it allows you to keep on fighting and prevents the enemy from doing so) but you can't steal someone's watch, food or valuables, for example.

Within games, it is like Experience Points (and commonly both used, as well) — a reward from defeating your enemies. The difference may be generally more or less certainty in what you may get from your enemies where with Experience Points, it is generally clearly aligned by certain parameters. Most RPGs (since many of them are spiritually descended from Dungeons & Dragons) have you discover a variety of equipment and currency when going through dungeons, both by taking them off of defeated enemies and by finding chests and other storage areas. The moral implications of Robbing the Dead rarely come up, because getting cool new stuff is always fun.

Related to this is Pirate Booty which is a treasure hoard gathered by pirates when they do this. Compare Kleptomaniac Hero and Rewarding Vandalism, which are the video game equivalents of this trope. The villainous equivalent is Rape, Pillage, and Burn, where stolen property is not the only offense. As well, the common gaming term of this trope is "loot, lewt, or 13\/\/7".