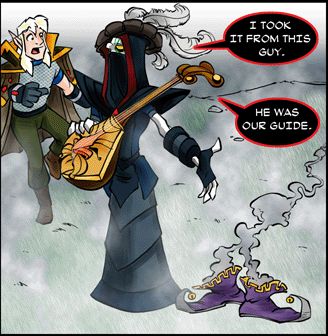 Richard, you really, really Didn't Think This Through...
"I am compelled to do evil, regardless of its utility."
— Dmitri Noumenon, Dresden Codak
Advertisement:

An exaggerated form of For the Evulz, where a character feels the need to do evil things even at times when such actions are clearly not in their best interests, sometimes to the point where it goes against basic self-preservation. Such characters will betray allies, kill team-mates, threaten or harm people who were previously willing to give them what they wanted, be petty, piss off all the wrong people, attack fellow villains to prove they're eviler, sabotage their leaders, abuse and exploit underlings, throw their weight around at every opportunity, engage in utterly pointless acts of cruelty, reward kindness with cruelty, spurn plans and start fights that they absolutely should not have started, rub salt in the wound even when it would destroy an already-present advantage, and generally be suicidally stupid simply because it's eeeevil.

In short, these characters cannot let go of the Villain Ball, to the point that it's a wonder they haven't caused their own death already, and it comes as no surprise if they eventually do.

This, along with Chaotic Stupid, is also often one of the reasons the forces of evil never manage to destroy the forces of good: it's not particularly evil to work with others, or acquire wealth and power through legal means, and so forth.

In video games, this often results from poor implementation of a Karma Meter. These games need to provide the player with the opportunity to be evil, but their evil actions usually can't go too far without either breaking the game's narrative or going over the line into uncomfortable territory. Thus, most "evil" options in games take the form of random Kick the Dog or Video Game Cruelty Potential moments, most of which offer little to no gain (extorting a quest-giver to slightly increase a meager reward) or are even harmful to you (killing off a potential ally). In games where having very low karma provides some kind of benefit, it turns into players aiming to get the lowest as quickly as possible, which invariably leads to this trope in terms of how their character will act.

Compare with Lawful Stupid, Chaotic Stupid, Stupid Neutral, and Stupid Good. Contrast with Pragmatic Villainy, when a villain only does evil things for practical reasons and refrains from doing them when they would be counter-productive, or Poke the Poodle, when a character tries to do bad things but is either too kind or ineffectual. See also the Insufferable Imbecile, who is not always a villain, but whose deliberate ignorance leads to a rejection of the basic rules of decency. Also compare Sanity Has Advantages. If an otherwise competent antagonist momentarily becomes Stupid Evil, they've caught a Villain Ball. See also Dick Dastardly Stops to Cheat, where a villain sabotages their own scheme by doing evil when they could've won by playing fair, and Cut Lex Luthor a Check, where a villain uses something for evil when their goal could have been accomplished with it legally. If a character becomes aware of this trope and switches sides, see Moral Pragmatist. For this trope's Good Counterpart, see Good Is Dumb.

Not to be confused with Stupid Crooks.

When Bradford is making his escape, he finds that Black Heron is using a helicopter with the F.O.W.L logo, exposing his secret to the McDuck clan.

When Bradford is making his escape, he finds that Black Heron is using a helicopter with the F.O.W.L logo, exposing his secret to the McDuck clan.