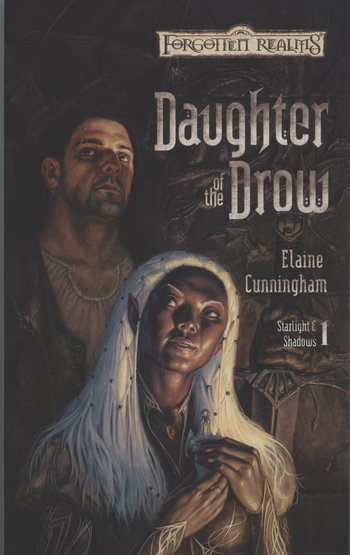 Starlight and Shadows is a trilogy of Dungeons & Dragons novels by Elaine Cunningham, set in the Forgotten Realms setting in the year 1361 DR.
Advertisement:

Fyodor is a Rashemi berserker who is unable to control his berserk rages. A danger to himself and others, he is sent away from his homeland on a mission to recover a powerful stolen magical artifact: the Windwalker, which might grant him the means to control his dangerous power.

Liriel Baenre is a drow who trained a wizard before becoming a priestess of Lolth. She has little interest in the savage politics of Menzoberranzan, instead longing to explore the surface world. In this, she faces an enormous obstacle: drow magic is dispelled by the sun's light, meaning she would lose all her magical strength. But then she learns of the Windwalker, which holds the potential to preserve her magic against the sun's light and make her dream of exploring the surface world come true.

Inevitably, their paths cross in their pursuit of the artifact. But they are not the only ones who desire it: there are other drow who realize the power that the Windwalker could give them, and seek to obtain it so that they might spread Lolth's dark reign to the surface. As Liriel and Fyodor proceed on their quest, they find themselves having to team up in order to battle mercenary followers of the Masked God, a powerful illithid crime lord, and a vengeful drow priestess. But the most pernicious threat of all is the corrupting influence of Lolth, who wishes to twist Liriel into her mortal champion.

The trilogy consists of Daughter of the Drow, Tangled Webs, and Windwalker.