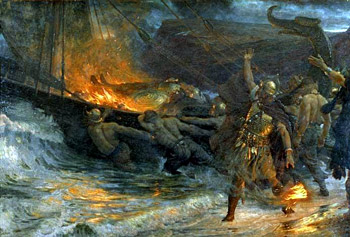 "The Funeral of a Viking" (Frank B. Dicksee, 1893)
Place my body on a ship and burn it in the sea
Let my spirit rise, Valkyries carry me
Take me to Valhalla where my brothers wait for me
Fires burning to the sky, my spirit will never die!
— Manowar - "Swords In The Wind"
Advertisement:

A subtrope of Burial at Sea in which the deceased (usually a warrior, but not necessarily a Viking) is laid in a boat with his effects, such as a sword, and set out to drift at sea. Then, a character (usually someone with emotional ties to the dead, or simply the most skilled archer present) lights a flaming arrow and shoots it at the sail. The ship is then engulfed in flame and slowly breaks up and sinks.

Played straight, it can be a Tear Jerker. When Played for Laughs, the character charged with shooting the flaming arrow will continually miss or fumble his bow. When played historically accurately, a slave will be killed (and probably gotten known by her late master's companions) as part of the ceremony.

In some cases (as in real history), the fire-arrow step isn't performed. This can be due to a lack of flammable sails and fire arrows, a need for haste, or simply different funerary practices. A third (also more accurate) variant exists in which the boat is not set out to sea, but instead used to lay the corpse in for a funeral pyre. And finally, Viking funerals need not be literal. Many examples feature metaphorical stand-ins for any of the aspects of the ritual.

In real life, this wasn't the only way Vikings used ships in funeral rites. Vikings (or Norsemen in general) practiced a variety of ship-themed funerals which included burying an entire ship (which is great because that has allowed for exact reconstructions in modern times) to cremation aboard a boat and in the case the wealth elite, a ship. The idea of the ship being put to sea only occurs in a single mythic event: Baldr's funeral. Then again, it goes without saying that such a funeral would leave no traces.

Because this is a Death Trope, there are unmarked spoilers ahead. Read at your own risk.

SMG4 and Mario send off their old merchandise on a boat before lighting it on fire with an arrow.

SMG4 and Mario send off their old merchandise on a boat before lighting it on fire with an arrow.