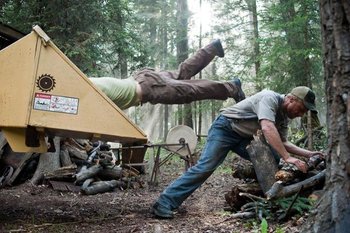 Spoiler alert: that guy is not going to be okay.
Advertisement:

Any time you see someone using a wood chipper for its intended purpose, you probably cringe in fear, because in movie and TV land, wood chippers are big 'ol murder machines that'll turn your body into an unidentifiable pulp. if you're unlucky enough to fall in. Alternatively, a wood chipper is also depicted as an excellent way of Disposing of a Body, albeit with a lot of gore and possible jamming of the mechanisms in the process.

This fear of wood chippers is very Truth in Television - people have gotten gravely injured or even killed by falling into wood chippers. Hell, some yahoos have even pulled a Houdini with a body Fargo-style (with various results).

This is a Death Trope, so beware of some unmarked spoilers.