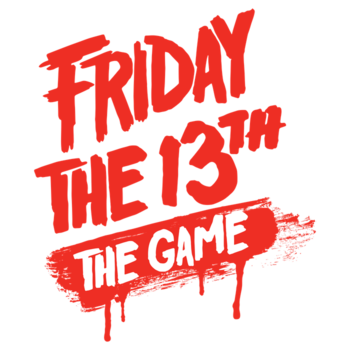 You and your friends will die.
...Find them, Jason! Make them pay for what they did to us!...
Advertisement:

Friday the 13th: The Game is a 2017 Survival Horror/Asymmetric Multiplayer game based on the original Friday the 13th film series, developed by IllFonic and published by Gun Media. It was released on May 26th, 2017 for PC, PlayStation 4, and Xbox One, while an "Ultimate Slasher Edition" was released on August 13th, 2019 for Nintendo Switch.

Up to seven players can work together as counselors at Camp Crystal Lake, who try to survive the night while being stalked and killed by the big man himself, Jason Voorhees. Or you can be a jerk and focus on getting yourself out of there, hijacking vehicles that other people have repaired while you had the keys. At the beginning of each match, the player characters are randomized and one person gets to become Jason, who has a variety of randomized and special abilities (including Villain Teleportation and heightened vision).

The remaining players must work to achieve one of several objectives, which include calling the cops, getting the parts necessary to fix a car and drive out of the area, calling a support character or (if the players are particularly coordinated or diligent) even killing Jason himself!

The game originally began development as a love letter to slasher films called Slasher Vol. 1: Summer Camp. After the producers received the rights to use the film license from Sean Cunningham (the original creator of the franchise), they raised more than $1.2 million from crowdfunding campaigns.

In June of 2018, after a cessation of rights caused by a lawsuit between Victor Miller and Sean Cunningham over the Friday the 13th rights, the development of new content for Friday the 13th: The Game was permanently cancelled. A few months later in September, IllFonic departed as developers for the game and Black Tower Studios took over development for any future balancing and bugfixing patches. IllFonic would go on to create another licensed asymmetrical multiplayer for the Predator franchise, Predator: Hunting Grounds.

In November of 2020, it was announced that the game would receive its final update that month and, with it, the dedicated servers for the game would be shut down with peer-to-peer matchmaking being used for Quick Play lobbies going forward along with a permanent increase to XP, CP and Tape Drop rates

Friday the 13th: The Game contains examples of the following tropes: