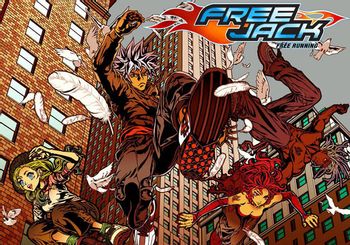 Freejack Online, known more commonly as simply “Freejack”, is a free-to-play online parkour Racing Game developed by Game Bridger Entertainment and released by GamerKraft, downloadable for free on their website

It is set in “New Jack City”, a city made up of such varied locales as a mining complex, a china town, an urban seaside and outer space.The story starts with a mysterious figure known as “Freejack” appearing in the city and causing an explosion in the popularity of freerunning, attracting many colorful characters from various backgrounds to the city for each their own reasons, but mostly jumping off things as fast as possible.

The main portion of the game consists of online races against other players, either using items in a manner vaguely akin to Mario Kart or with no items to focus purely on your raw speed and skill. There is also a brutally hard mission mode, which contains most of the in-game plot advancement.

As of August 2013, the client for Freejack Online has stopped working altogether. Players can't even download it. There is a rumor that the creators got into a copyright infringement over their music by Jet Set Radio.