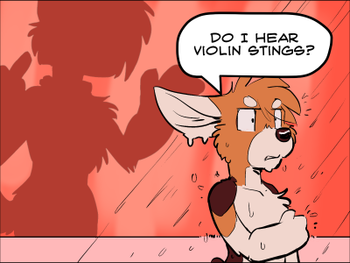 get that mouse orchestra out of here
"Violins. Oh, no."
— Satsuki Miyanoshita, Ghost Stories
Advertisement:

A common audio cue used when you want to establish that something or someone is deeply insane, evil, or unnatural, but the Ominous Latin Chanting is off on vacation: a series of sharp, screeching notes on any string instrument. Sometimes this is paired with the Vertigo Effect. When done on strings, like in Alfred Hitchcock's Psycho, it is frequently used by three short, fast bow strokes below the bridge — the wooden piece that holds the strings up — of a cello.note Yes, they used a Cello in Psycho. For comedic effect, most will reference a violin instead.

In most horror movies, if it's not strings, it's probably a waterphone