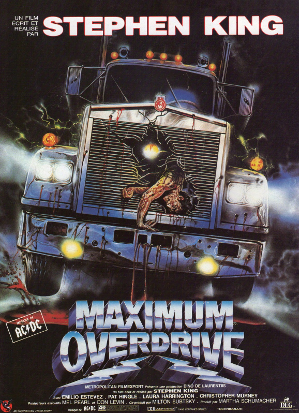 Who made who, who made you...
"If you want it done right, you have to do it yourself."
— Stephen King, apparently still in the middle of his mammoth cocaine bender, in the trailer.

Maximum Overdrive is a 1986 horror film written and directed by Stephen King, based on his short story "Trucks" from the Night Shift collection (other stories from which were adapted into Cat's Eye, which was also produced by Dino De Laurentiis). The same short story was later adapted into a Made-for-TV Movie in 1997.

The movie centers around people trapped in the Dixie Boy truck stop outside Wilmington, North Carolina, surrounded by homicidal trucks and other machines which have become animate and dangerous from radiation produced by a comet close to earth. The cast includes Emilio Estevez, Pat Hingle, Laura Harrington, Frankie Faison, Leon Rippy, and Yeardley Smith.

King later admitted that he was coked out of his mind while making this film. This explains a lot.