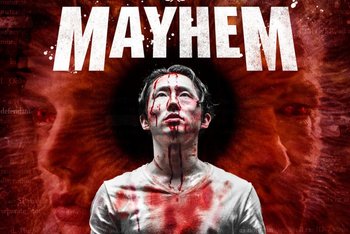 It tells the story of Derek Cho (Yeun), a young lawyer making his way in a world beset upon by a virus that temporarily causes its victims to lose their inhibitions and morality and act purely upon their desires and emotions. Significantly, Cho works for the law firm responsible for the legal decision that the infected are not responsible for crimes committed while under the effects of the disease, and Cho himself is the lawyer who successfully argued the case.

This doesn't save him, however, when the firm needs a scapegoat for a botched case. Despite having nothing to do with it, Cho seems doomed to lose his job and face the legal consequences for the firm's mistakes... At least until armed police arrive and quarantine the building. It seems the virus has made its way inside, and Cho soon realizes that he, along with everyone else, is infected. Now legally able to do whatever he wants until the quarantine expires, Cho teams up with a victim of the firm's practices (Weaving) and sets out in search of revenge.