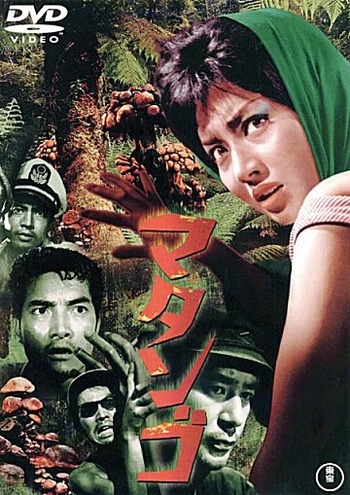 Matango, known in the US as Attack of the Mushroom People, is a 1963 Japanese horror film from Ishir⁠ō Honda, director of the original Gojira. It's an adaptation of a short story called "The Voice in the Night"

When a Japanese yacht is damaged in a storm, its crew and passengers make their way to a nearby island. The island is apparently deserted, though the castaways soon discover a beached research ship on the other side of the island. An examination of the ship, the insides of which are encrusted with a thick mold, soon reveals that it had an international crew who appear to have been involved in radiation and fallout research. Despite this, it seems that the crew survived for some time after the ship was beached, however there is no indication of their current whereabouts.

Although mushrooms are unusually plentiful on the island, the ship's captain warns the passengers not to eat them because of the danger of poisoning, and to concentrate on birds and turtle eggs. However, it is soon discovered that birds are afraid of the island and that turtle eggs are scarce. A small supply of canned food is found on the research ship, but this only buys the crew some time. Inevitably, members of the crew begin eating the mushrooms. In the meantime, they also discover that the crew of the abandoned ship may not have vanished as completely as they'd originally thought...