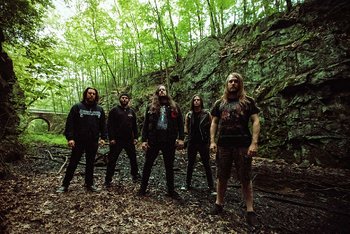 The Black Dahlia Murder are an American melodic death metal band hailing from Detroit formed in 2001. They released a demo entitled What a Horrible Night to Have a Curse and a four-track EP, A Cold-Blooded Epitaph. Soon afterwards, they were signed onto Metal Blade Records and have stayed there for all of their albums as on 2013.

For the third album, they toured alongside with Cannibal Corpse, Æon, The Red Chord, Goatwhore and The Absence in 2007, and again in 2008 with 3 Inches of Blood, Hate Eternal, and Decrepit Birth, followed by another alongside Brain Drill and Animosity (which infamously ended up going very poorly for Brain Drill due to a certain incident at a border crossing). John K left the band and was replaced by Ryan Knight of Arsis fame during the beginning of 2009

In February 2011, The Black Dahlia Murder completed the songwriting process for the their fifth studio album, entitled Ritual. It was released on June 21, 2011 in North America to outstanding critical acclaim. The band supported Amon Amarth on their May 2011 European tour, as well as headlined the 2011 Summer Slaughter tour, both in support of Ritual. All was going well until Shannon Lucas announced that he was leaving to pursue other career paths, with Alan filling in as support before joining full-time. Despite their leaving, they announced that they would continue writing music. In 2013, Everblack was completed and announced for a summer release.

In 2015, the band finished writing and recording their seventh release, Abysmal. As of February 2016, Ryan Knight has officially left the band, but both parties stressed that it was on the best of terms and that he did his best to make it as easy as possible. Brandon Ellis was picked by Knight as a fill-in and eventually became their new full-time lead guitarist.

On May 11, 2022, Trevor Strnad's death by suicide was publicly announced. He was 41 years old. The decision was eventually made for Brian Eschbach to take over on vocals, and Ryan Knight also returned to the band.

I COULD NEVER LET YOU TROPE, MY DARLING COLD AND BLUE!: