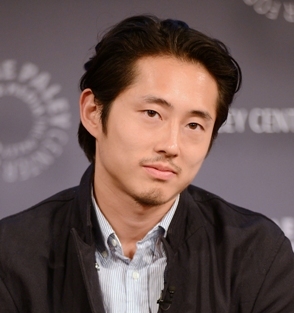 "Hey you, dumbass! Yeah, you in front of the screen. Cozy in there?"
Advertisement:

Steven Yeun /ˈjʌn/ (Korean: 연상엽; born Yeun Sang-yeop, December 21, 1983 in Seoul) is a Korean-American actor. He is best known for his role as Glenn Rhee on AMC's horror drama television series The Walking Dead. Yeun has also appeared in many short and feature films, and has done video game and cartoon voiceovers. He is fluent in both English and Korean and starred in the Korean film Burning. In 2021, he became the first Asian-American in history to be nominated for Best Actor at the Academy Awards, for his lead role in Minari.