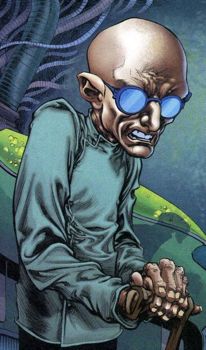 Spinnerette: Dr. Universe, wait! At least tell me something! You were a respected scientist, your work on the Cherenkovkirby Reactor was going to benefit all of mankind! Why would you turn into a supervillain? WHY?!
Dr. Universe: I read an Ayn Rand novel.
— Spinnerette
Advertisement:

The Evil Genius is obviously intelligent, and is the one building the Wave-Motion Gun or shipping the nukes into the country or resurrecting the Lost Superweapon or what have you. This character is usually the one that will demonstrate how to use a particular MacGuffin. They're usually a planner of some sort, a specialist in a particular field (such as computers or electronics), a fixer of some variety, (or a combination), so they're in the best position to deliver the goodies to the Evil Overlord. In medieval fantasy settings, this role is often played by an evil strategist, rogue/spymaster, or a dark wizard (provided they aren't also the Big Bad). The Evil Genius is the most likely person to be the Big Bad because they are the brains behind the Evil Plan.

Although they tend to be the most intelligent, that intelligence usually never translates into political savvy, business acumen or leadership ability all of which rely more on street smarts, people skills and charisma than just technical knowledge. As a result, the evil genius is rarely the top dog. But he's still closer to the top than most. An evil genius might occasionally be savvy enough to realize that being a "number two" or "number three" is a lot more secure and less stressful than being the top dog.

Just like his Good Counterpart in the Five-Man Band (which is The Smart Guy), this character is very frequently described as physically unimposing, making them a manifestation of Brains Versus Brawn.

Prone to being Bad Boss'd when the ridiculously circuitous plan inevitably fails or if they are no longer needed and viewed as a liability. Whether this leads to a Mistreatment-Induced Betrayal (and by proxy a Heel–Face Turn) is another matter.

An Evil Genius who is also the Big Bad will frequently be The Chessmaster and/or a Manipulative Bastard, maybe even to the point of Magnificent Bastardry. They may also be the Orcus on His Throne due to being a thinker, not a fighter. Sometimes, their only superpower may be their wealth that affords them the ability to be a supervillain. Their genius might lie more in how they aquired their wealth and became and N.G.O. Superpower rather than in whether or not their villainous activites are all that successful.note If they were successful too much of the time, the heroes wouldn't be much use. They can also show up as members of a Quirky Miniboss Squad, but then are usually made significantly less effective by virtue of their quirkiness. They often are also Morally Ambiguous Doctorate. Some even qualify as Four Eyes, Zero Soul. Compare Mad Scientist, another villainous and scientifically gifted character type that sometimes overlaps with this one.

Not to be confused with the Diabolical Mastermind simulation game Evil Genius, nor the books by Catherine Jinks, which involve a Academy of Evil aimed at creating these, or the Netflix series about one of the most infamous bank heists in history.