Film / A Fistful of Dollars 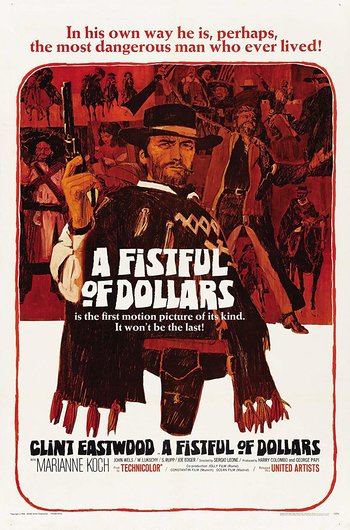 A Fistful of Dollars is the 1964 Italian (and originally unauthorized) remake of the Japanese film Yojimbo, which itself was allegedly inspired by the novel Red Harvest by Dashiell Hammett. It's the first in what's known as The Dollars Trilogy by Western fans, and was followed by For a Few Dollars More and The Good, the Bad and the Ugly.

The Man With No Name (played by Clint Eastwood and called "Joe" by the coffin maker) wanders into a small poverty-stricken town on the Mexican border dominated by two feuding crime gangs, the Rojos and the Baxters, and he decides to play the clans against each other, ostensibly so that he can profit from their conflict. The opportunity arises in the form of a Mexican shipment of gold passing through the town. However, his sympathies for Marisol, a hostage of the Rojos gang, leads to a change in plans with near-fatal consequences for the Man With No Name.

The gunfight at the end is the most famous part of the film. Back to the Future Part III directly homages it, among other Shout Outs to this movie.

A novelization was written by Frank Chandler.

This Spaghetti Western provides examples of the following tropes: