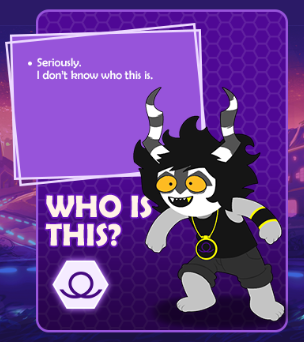 Unlike most examples here, this guy does have a name. Not that it's in his vocabulary.
Larry: Oh golly... uh, what's your name?
Scallion #1: They've never given me a name. I've been around since show one and I still don't have a name!
— VeggieTales, "Lyle the Kindly Viking"
Advertisement:

A major character is never referred to by their actual name, instead being addressed by a title, nickname, or none at all. Reasons for this vary, but it often serves the function of making a character seem more mysterious or eccentric.

This trope can be somewhat justified, however, due to Nominal Importance: it's difficult enough for the writers to come up with good names for the main protagonists; it would be incredibly painstaking to come up with equally good names for a cast of characters who exist solely as part of the setting and serve no further purpose to the narrative.

Another common variation is for a series where a child is the main character to have parents only referred to as Mom and Dad.

Sometimes, a main protagonist will have no name to add to their mystique. Or, it may be because they can't be named.

Compare The Trope Without a Title, You Know the One, I Know Your True Name (which may be a reason for this), and No Full Name Given. Contrast Only One Name, Everyone Calls Him "Barkeep", and I Am Not Shazam. Compare and contrast The Scottish Trope, for where characters know a name, but actively avoid saying it. See also Nameless Narrative and The All-Concealing "I". When a character genuinely has no name whatsoever (as opposed to it not being given in the work), then they are The Nameless. If the character's parents never named them, then they were Never Given a Name. When a character is literally given the name "Nobody", then they are Somebody Named "Nobody".