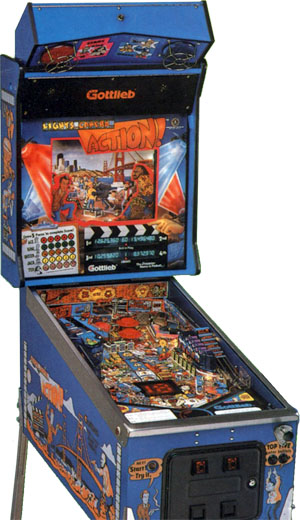 "Quiet on the set!"
— Director
Advertisement:

Lights... Camera... Action! is an arcade pinball game released by Gottlieb (under the "Premier" label) in 1989. It was designed by Jon Norris, with artwork by Brian Johnson and Constantino Mitchell. It was also one of the company's earliest System 3 tables, allowing for a more complicated game (similar to their competitors).

In this game, the player is a budding Director working on a summer action movie. Under the heat of the spotlights, travel around San Francisco, wrap up the five big Scenes, and finish the Blockbuster. Complete the Stunt Sequence, perform the Helicopter Rescue loop, then flip the ramp and film the big Shoot-Out in the backbox. Keep an eye on the countdown timer embedded in the playfield, use the Catch-Up feature to stay in the game, and collect the stars' playing cards to build up your Poker Hands.

A digital version is available for The Pinball Arcade.