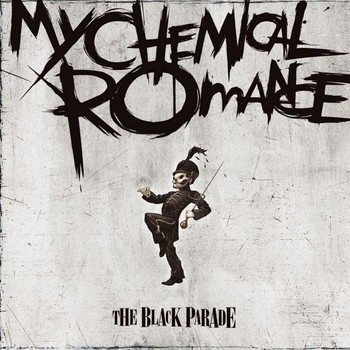 "When I grow up, I want to be nothing at all!"
When I was a young boy
My father took me into the city
To see a marching band
He said, "Son, when you grow up
Would you be the savior of the broken,
The beaten and the damned?"
He said, "Will you defeat them,
Your demons and all the non-believers,
The plans that they have made?
Because one day, I'll leave you
A phantom to lead you in the summer
To join the Black Parade."
— "Welcome to the Black Parade"
Advertisement:

The Black Parade is the third studio album by Alternative Rock band My Chemical Romance, released on October 23, 2006. A Rock Opera/Concept Album, it tells the story of a terminally ill cancer patient (known simply as "The Patient") and the final thoughts and visions that go through his head as he lies dying in a hospital.

When death arrives for the Patient, it appears to him as a parade, recalling the fondest memory he has of his past (outlined in the lyrics of the page quote). This was based on an idea that singer Gerard Way had at the time of the album's production that death came to a person in the form of their fondest memory, and a parade was chosen as it could be used for both funerals and celebrations. The concept was also extended into the album's visuals through the creation of the alter-ego band The Black Parade, which the band performed as when playing the album live.

With a grandiose epic sound influenced by Emo, Progressive Rock, Pop Punk, Post-Hardcore, and Glam Rock, The Black Parade gained the attention of a larger audience than the band's earlier releases and was featured in several lists of the best albums of 2006 as well as the 2000s.