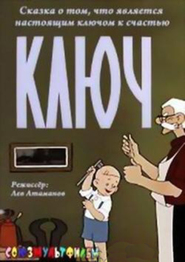 The Key (Russian: Ключ; Klyuch) is a 1961 Soviet animated film, directed by Lev Atamanov. It was produced at the Soyuzmultfilm studio in Moscow.
Advertisement:

The father comes home from the store with presents for his newborn son. Upon arriving, three fairies visit them and gives the family a ball of yarn, which is said that it will lead him to the "door of happiness". His grandfather visits and gives him tools that he could use later in life but the fairies and the parents refuse as they said that his happiness had already been planned. Not liking the idea of having "ready-made happiness" out of fear of his grandson's future, he attempted to throw the present out the window only to be sent back to his apartment as a sheet of paper. He later escapes and decides to seek help.

The film can be watched with subtitles here

, which is separated in four parts. In addition, the official channel has uploaded the full film here