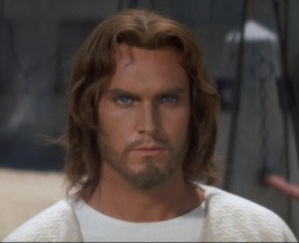 King of Kings is a 1961 Biblical epic about Jesus Christ and his times, directed by Nicholas Ray and distributed by MGM.
Advertisement:

It stars Jeffrey Hunter as Jesus — and Rip Torn as Judas Iscariot, whose role is somewhat beefed up. It was one of the first Hollywood films since the silent era to avert depicting Jesus as The Faceless or The Ghost out of piety. The narration was written by an uncredited Ray Bradbury and spoken by an uncredited Orson Welles. The score was composed by Miklós Rózsa.

Not to be confused with The King of Kings, a 1927 version of the story directed by Cecil B. DeMille.

Tropes found in King of Kings include: