Film / I Was a Teenage Werewolf 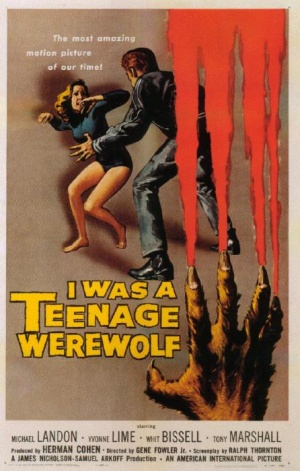 Tony has a problem: he's a bitter, abusive, dairy-tossing asshole. His girlfriend Arlene has an even bigger problem: she's slavishly devoted to him, for unknown (but probably daddy-issues related) reasons. After he whales on yet another one of his friends, Arlene finally gets Tony to visit a therapist and seek help. Too bad for him, he happens upon one of those "mad scientist" type psychiatrists who has big plans for violent and stupid Tony; he's going to make him even more violent and stupid. Yes, the crazy doc hypnotizes Tony into becoming a werewolf. Turns out lycanthropy is a placebo; who knew?

Strangely, although Tony seems to be much calmer after starting therapy, this ends up not helping him at all, as now he's gone from simply pummeling innocent friends to tearing out their throats at night or after a loud noise, and then not remembering what happened. He isn't too keen on the long-term implications of this new gig and seeks out the doctor again for help — not realizing he was causing all of his problems in the first place. Things go belly-up shortly after that, with a few more people ending up dead before the cops arrive and turn Tony into Swiss cheese. Sadly, at this point he's no longer alive to throw himself at them, but on the bright side, at least now Arlene has a chance to finally experience a healthy relationship. ...Ah, who are we kidding? She'll probably just hook up with Ike Turner or something.

The film was both a financial and critical success when it was first released. It was also innovative in that while 'man turns into werewolf/vampire/whatever' movies were common, this was the first that had it happen to an adolescent. Michael Landon's acting especially was praised by critics for being believable and sympathetic (well, believable, anyhow), and helped make this his Star-Making Role, as he would go on to star on Bonanza about two years later. Face it: you owe it to yourself to see Little Joe Cartwright/Mr. Ingalls/Johnathan Smith chucking a bottle of milk at the wall and pounding on his annoying classmate.

Followed by I Was A Teenage Frankenstein (1957) and How To Make A Monster (1958). Oh, and in case you were wondering, the oft-parodied "I Was a Teenage so-and-so" stock horror title originated with this movie.

The film got a Shout-Out when The Cramps included a song about the movie on their first album, Songs the Lord Taught Us. Stephen King was also a fan as a kid, and included an entire chapter in IT where some of the heroes see it and then discuss their favorite parts.

I Was a Teenage Troper: