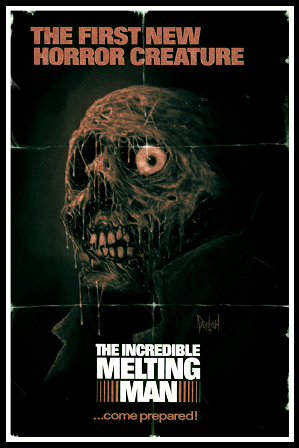 The Incredible Melting Man is a cheeseball 1977 American Sci-Fi Horror film about an astronaut who is exposed to outer-space radiation and then comes back transformed into a hideous monster. The good news is that unlike the last time this happened, there really IS a monster here!
Advertisement:

You see, Doctor Steve West's time over on Saturn has left him slowly melting into glop while simultaneously giving him superhuman strength and an insatiable appetite that only human flesh can sate. Don't bother asking about how he can easily pull victims apart with a rapidly deteriorating musculoskeletal structure; that'll just get in the way of all the ooey-gooey makeup effects! To its credit, this is one of the things the movie does well; Rick Baker's nastily convincing special effects really do look every bit like a man slowly liquifying before our eyes, and the movie is packed with Nausea Fuel and graphic violence that really stood out at the time.

The director, William Sachs, initially intended for the film to be a parody of other sci-fi horror films, but it became more of a straight horror movie during production. Several scenes were re-shot or altered without Sachs's input; some moments from the more comedic original script remain intact, however, resulting in the surreal tone of the film.

As one might expect, the film became a classic Times Square grindhouse film, getting noticed by The Phantom of the Movies (Joe Kane) and Joe Bob Briggs, before getting additional fame as an episode of Mystery Science Theater 3000.

Not to be confused with The Molten Man, a Spider-Man supervillain.