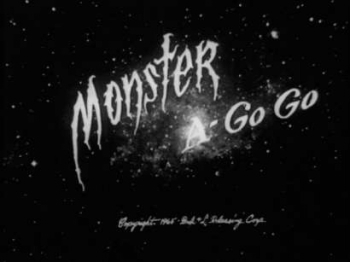 "You may come from beyond the moon,
But to me, you're just a goon!"
— The Other Three, lyrics to Title Theme Tune
Advertisement:

Describe Monster a Go-Go here:
What is this? I don't even.

In 1965, director Herschell Gordon Lewis needed another movie to round out a double-feature with Moonshine Mountain. So he bought Bill (The Giant Spider Invasion) Rebane's unfinished Terror at Halfday, added a couple of extra scenes, some new dialogue, some narration, and voilà: Monster a Go-Go was born. (The birth was illegitimate, as Lewis did not deign to put his name on the movie, instead crediting himself by the pseudonym "Sheldon S. Seymour.")

The plot, such as it is, is that an astronaut has gone missing after crash-landing in suburban Illinois. At the same time, a monster that looks suspiciously like the lost spaceman (and is highly radioactive) has been terrorizing teenagers and scaring the pants off of the locals. Scientists work to study the monster, but he escapes into the Chicago sewers, only to disappear suddenly.

As if a switch had been turned, as if an eye had been blinked, as if some phantom force in the universe had made a move eons beyond our comprehension, suddenly, there was no TV Tropes page.