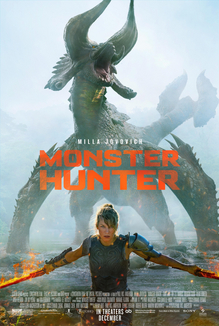 Monster Hunter (with the subtitle The Hunt Begins in some territories) is a 2020 action-adventure Kaiju film directed by Paul W.S. Anderson and starring Milla Jovovich and Tony Jaa. It is based on CAPCOM's Monster Hunter videogame franchise.

In the "New World" an expedition composed of Monster Hunters sail the sands towards an ominous tower surrounded by a constant storm. Then they are attacked by two horned-wyverns known as Diablos, and one of the hunters (Tony Jaa) is thrown overboard.

Meanwhile in "Our World", an U.N Alpha Team — led by Captain Artemis (Jovovich) — is searching for the M.I.A. Bravo Team in Afghanistan with the only clue being their last transmission mentioning a storm. As the Alpha Team ride their two vehicles through the rocky desert they notice strange rocks as they track the last known path of bravo team. Then a strange storm rolls in, engulfing them as they try to escape and energize the rocks thus transporting them to the "New World". In the chaos and confusion of a monster attack, Artermis makes contact with the missing hunter and both team up to survive with Artemis eventually adopting the Hunter's ways of fighting the monsters of the New World.

The film was released in theaters in both the United States and China in December 2020, though it has since been pulled out of the latter note Due to a joke which some found to be racist towards Asians.

A promotion event was held in Monster Hunter: World where players could play as Captain Artemis (voiced by Jovovich herself) from the film fighting against monsters such as Diablos and Rathalos.