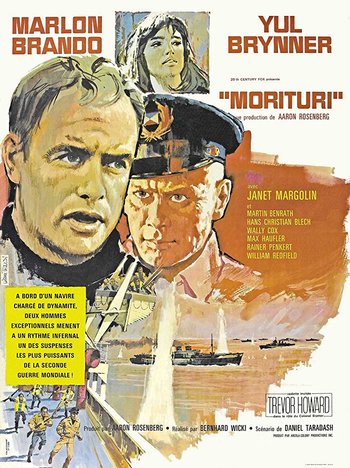 Morituri is a 1965 American World War II film adapted from the novel of the same name by German author Werner Jörg Lüddecke, directed by Bernhard Wicki and starring Marlon Brando and Yul Brynner. It bombed in theaters, mostly because moviegoers didn't understand the title (for those who skipped Latin, it means 'those about to die').

We start in 1942 Japan, where German naval officer Kruse (Martin Benrath) is protesting his assignment as First Officer instead of Captain of the SS Ingo, a freighter carrying vital supplies to the war effort in Bordeaux. The Admiral Wendel takes the opportunity to snark at him, mentions that he's not going to enjoy his own posting on a submarine, and reminds him that orders are orders, no matter your rank.

Enter Captain Mueller (Brynner), who's not at all pleased at the news that he is expected to have several felons in his crew, and not afraid to let the admiral know of his displeasure. However, he doesn't have a leg to stand on, since his last ship had been torpedoed while he was drunk, and his reputation affects that of his son's, who is also a captain. The roster stays as it is.

Cut to British-held India, where a Colonel Statter (Trevor Howard) is blackmailing a Mr. Schroeder (Brando), whom British Intelligence knows is a deserter from the German military. If Schroeder facilitates the capture of the Ingo, he will be left alone to live as he chooses. If he refuses, British and German forces will have an exchange of hostages, which would place Schroeder in the hands of the Gestapo. Schroeder relents. He will pose as an SS Standard Leader named Hans Kyle, disable the scuttling charges on the ship, and be picked up by American forces when all is said and done.