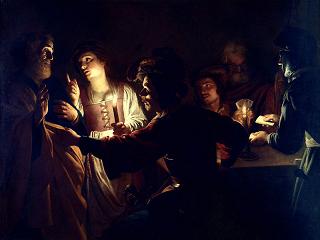 Tenebrism: next-level Chiaroscuro
"Some of the lighting to me was almost like a painting from the past, like from the seventeenth century, a Rembrandt look about it, the darkness of the house and the sunlight searing through the boarded-up windows."
— Vincent Peranio, production designer on The Wire
Advertisement:

A visual trope, using a stark contrast between dark and light in an image, usually for dramatic effect. Generally uses directional lighting and sharp shadows. Developed in the Renaissance for painting and became very popular among Baroque painters, all the way to the school known as "tenebrism". And never quite vanished since.

Film Noir is fond of it, but it is found in all sorts of works in visual media, whether constantly or to underscore moments of high drama. A great number of critics and satirists have pointed out that mainstream video games and movies are drifting towards this.

A Face Framed in Shadow — half lit, half-shadowed — is a perfect example of chiaroscuro.

Games with Cel Shading tend to employ this with their shadows.

May combine with such tropes as Evil Is Not Well-Lit, Conspicuously Light Patch, Ethereal White Dress, and By the Lights of Their Eyes, and even Raven Hair, Ivory Skin.

Generally speaking, a work that combines dark brown or black shadows over much of the image with bright silver and gold (or flesh-tone) highlights is usually described as chiaroscuro.

Used with care, it can produce eye-popping 3D effects, often trompe de l'oeil. It can also be used in live-action film to help cover up the cheapness of the sets.

The term comes from Italian, where it means "light-dark". English words derived from the same root are, respectively, "Clear" and "Obscure". It's pronounced as "Kya-ro-skoo-ro", not "Shia-ro-".

Not to be confused with the ancient desert city of glass from the tabletop RPG Exalted. Or that rat from The Tale of Despereaux (though he was named for this trope as a joke by his parents).

A Sub-Trope of Light/Darkness Juxtaposition, and a Super-Trope to Dramatic Spotlight, Emerging from the Shadows.

Contrast Hollywood Darkness, when the dark isn't dark, and Who Forgot The Lights?, when the light isn't light. See also Mood Lighting and Color Contrast. Not to be confused with Darker and Edgier, since this trope is typically used to highlight the bright spots.

Contrast Nuclear Candle, where light sources illuminate the screen completely and without any appreciable shadows.

This item is now available in the Trope Co.® catalog.