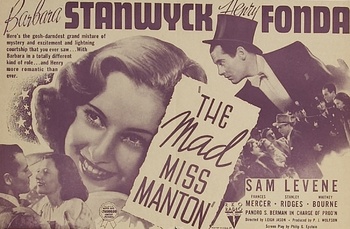 From The Golden Age of Hollywood, comes a mystery/ Screwball Comedy from RKO Pictures, The Mad Miss Manton (1938).

Melsa Manton (Barbara Stanwyck) and her debutante friends are constantly hounded by the press, especially from editor, Peter Ames (Henry Fonda), who thinks they’re a bunch of rich nitwits.

The girls’ reputations take a turn for the worse when Melsa stumbles upon a dead body in socialite Sheila Lane’s abandoned apartment, and sees one of her society friends, Ronny Beldon, speeding off in a car. But when she calls the police and takes them there, the dead body has disappeared.

Peter Ames writes a nasty article about Melsa and her apparent trick on the cops. This persuades her to sue for libel, and get the help of her friends to solve the mystery and clear their names.

Although thought as a nuisance by Lieutenant Brent and Peter, Melsa and her troop of bumbling friends are much more useful to the case than previously thought.

Miss Manton was the first comedic pairing of Stanwyck and Fonda, and features Hattie MacDaniel, as Hilda, Melsa’s housemaid who whips wise-cracks as quickly as Melsa.