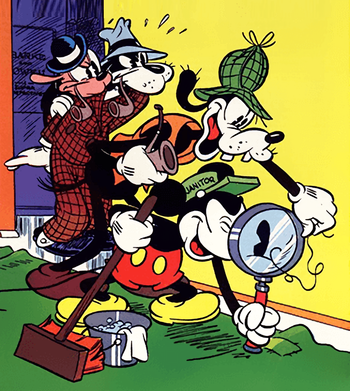 "It's elementary, my dear Goofy. From this piece of evidence, I can safely deduce that... I'm really bad at this cleaning job."
Shawn: I gave you the guy!
Detective Lassiter: He had a partner.
Shawn: I have to find that guy now? I'm confused; when do you start chipping in?
— Psych
Advertisement:

Character with no formal connection to law enforcement who regularly solves crimes, but does not get paid for it.

Often a Mystery Magnet. If so, despite the amazing number and variety of murders that occur wherever he or she happens to be, the Amateur Sleuth is rarely — if ever — suspected of any complicity. This notwithstanding, the possibility that the Amateur Sleuth is in fact a very clever serial killer is a common joking assertion among some viewers. As one stand-up comedian once said of Jessica Fletcher from Murder, She Wrote, "Wherever dat little white woman goes, somebody dies!" Another stand-up comedian remarked that "giving this woman a plane ticket is like giving Manson parole."

The other variety of amateur sleuth acts just like a professional, apart from the minor details of not having police powers, and not being paid to solve crimes. Intrepid Reporters generally fall into this category. This might include a sleuth that would plausibly work with police on a regular basis because of the nature of their job. A typical example of this might be a district attorney or an insurance agent.

One common variety is a retired detective, such as Hercule Poirot or Nick Charles. Other specific variations are the Little Old Lady Investigates, the Kid Detective and the Mystery Writer Detective. Some Hardboiled Detectives will be amateur sleuths, though this is rare. Compare Private Detective.

In literature, amateur sleuths are very frequently Every Man (or more often Every Woman) characters who are nevertheless regarded as very intelligent and charismatic. They are not heroic in the I Was Born Ready sense but are still courageous and prefer brains to brawn (which they are unsuited for anyway). Often it occurs without the character actually stepping forward and assertively taking charge, but only because others simply defer to her because of her natural intelligence and intuition. The amateur sleuth genre is especially known for having a built in readership. One of the things often said about such readers is that they consider themselves more intelligent than the general public at large, and are typically not two-fisted alpha types such as those who commonly become heroes in fiction. There is the expectation from the readers that the protagonist be the type of character that they can see themselves as. Also, a good number of self published and small press mystery authors give their protagonists the same daytime profession as themselves.

Very susceptible to a Busman's Holiday. If female, they also frequently are in a Sleuth Dates Cop situation.

Amateur sleuths are the protagonists of nearly every story in the "Cozy Mystery" genre.

Her expert tracking skills, Focus, and natural intellect all combine to make Aloy an accomplished detective in a world that likely doesn't have much in the way of police investigation.

Her expert tracking skills, Focus, and natural intellect all combine to make Aloy an accomplished detective in a world that likely doesn't have much in the way of police investigation.