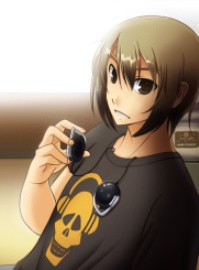 The psychic, unnamed protagonist.
Jisei is a series of supernatural mystery OEL Ren'Py-based Visual Novels created and produced by Sakevisual in their Green Tea Line. The titular first installment opens to a scene in a coffee shop with the unnamed main character waking up in a city called Edgewater. After conversing with the barista behind the counter for a while, he starts to feel strangely sick and hobbles to the bathroom. There he finds a dead woman with a knife in her chest.
Advertisement:

(Un)fortunately, our loner protagonist has an ability that allows him to "read" the death of any body he touches. He learns from this that the woman was not stabbed, at least not at first, and that she was apparently suffocated. However, while he's using his ability, a woman walks in, sees him touching the body, and makes the unfortunate assumption that he is the killer, interrupting the reading before he can fully determine the true cause of death. Now he must clear his name (no pun intended) and find out who the real killer and their motivation behind the grisly murder.

Jisei has currently spawned two sequels entitled Kansei and Yousei (in that order). Each game involves the protagonist (nicknamed "Kangai" by his friends) investigating (and inevitably solving) a murder while also piecing together his own fragmented past, including the gruesome murder of his younger sister. Joining him are a group of kids with similar psychic abilities (called "kansei"), a bitingly sarcastic but dedicated detective, and a whole cast of suspects and witnesses to be questioned. Jisei and its sequels can be purchased here