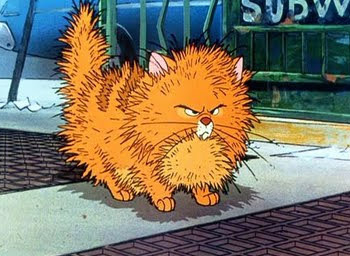 This is not a good day in the vanity department...
When a wet cat (or any animal with fur) gets dried off, its fur sticks up, often with a "poof"ing sound similar to an umbrella unfolding. This can give the effect of making it look kind of like a Tribble with a face. This trope is about the way hair standing on end when dried and exaggerating it for comedy. This isn't just "cat is slightly fluffier when freshly washed and dried"; this is "short-haired cat is now one big puff of long, fluffy fur". Talking Animals are usually rather annoyed by the entire process, and often non-speaking animals as well.
Advertisement:

This is one possible reason why Cats Hate Water, albeit a pretty vain one — though cats are often stereotyped as being vain as well, so it can fit.

The Beast shakes his fur dry after his bath

The Beast shakes his fur dry after his bath