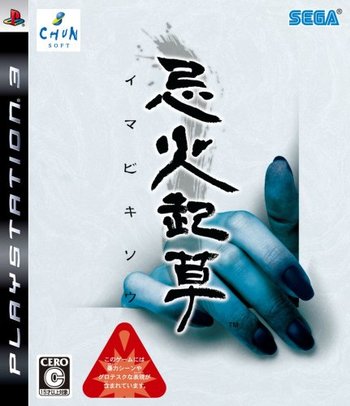 You don't want to know whose hand is that.
Advertisement:

Imabikiso (忌火起 in Japanese) is a Survival Horror Visual Novel made by Chunsoft (Currently, copyright is held by Spike Chunsoft) and published by Sega on October 23, 2007 for the Playstation 3. A Nintendo Wii port known as Imabikiso: Kaimei Hen (忌火起草 解明編 in Japanese) was published on August 7, 2008, which has additional story chapters not included in the PS3 release. An Apple iOS port was published in 2012. Currently, it's not available in the Japanese Apple Store.

The game was designed by Koichi Nakamura with the artwork done by Harukiho Sato. Both games currently carry a C rating under CERO. The game was made using animated/static photography with some live-action filmwork mixed in between to create the visuals. According to the production team, the visuals were inspired by the work done in the Ring and Grudge movie series, which you can see in some of the VN scenes in the game.

A new and mysterious drug known as "Vision" has been hitting the streets of Japan, being a hit with young people, especially to those studying in university. The drug, if and when taken, allows the users to see visions from a user's perspective while being high, created from a mysterious flower called Imabikiso. Players take control of a university student named Hiroki Makimura, who gets together with fellow student Manami Hayase and a few other students when they hear news reports of students being mysteriously killed with horrific burns on their bodies.

The two later investigate a mansion that's believed to be linked to the drug's creation and to Imabikiso after some of their classmates in university begin to die after taking Vision.