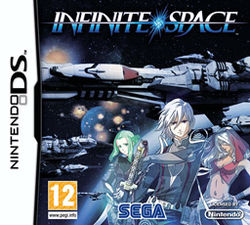 Infinite Space is a Sci-Fi RPG for Nintendo DS published by Sega, developed by Dating Sim creator (and original Steel Battalion developer) Nude Maker with PlatinumGames. It was released in 2009 in Japan and in 2010 globally.

The storyline follows the adventures of a young man named Yuri, a "launcher" named Nia, Yuri's sister Kira, and the (rather motley) crew he assembles after leaving his homeworld of Ropesk.

Has a character sheet. Feel free to contribute.

Not to be confused with series of space exploration/roguelike game by Digital Eel. Or, for that matter, Endless Space.