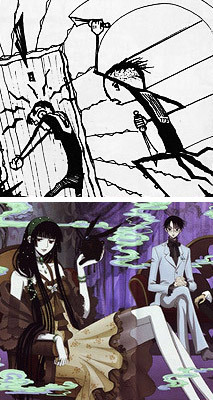 An art style in which characters are drawn with exaggeratedly long, thin torsos and limbs. This can look rather odd if animated. The term was coined in Johnny the Homicidal Maniac, although the term has also been picked up by the anime and manga fandom. Despite the floppy connotations of noodle-ness, character designs using this aesthetic frequently tend to be angular and pointy, like an uncooked noodle, especially around the joints (and, in anime and manga, possibly also the chins).

This tends to take one of two main forms:

While there are plenty of tall and skinny people in the real world, the difference between them and this trope is that noodle people are impossibly and disproportionately tall and skinny, so there is no such thing as a noodle person in real life .

Has nothing to do with incidents or implements. If you wanted a trope about characters whose limbs have the flexibility of noodles, that's Rubber Hose Limbs. Compare Nothing but Skin and Bones, Lean and Mean. Contrast with Puni Plush. Frequently paired with Creepy Long Fingers and/or Creepily Long Arms.