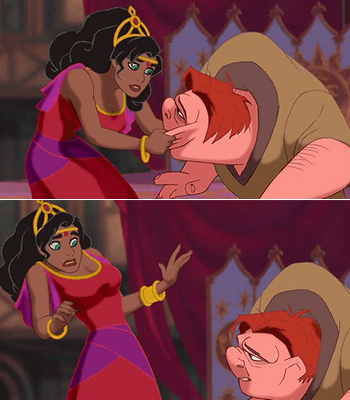 Camilla: You, sir, should unmask.
Stranger: Indeed?
Cassilda: Indeed, it's time. We all have laid aside disguise but you.
Stranger: I wear no mask.
Camilla: [terrified, aside to Cassilda] No mask? No mask!
— The King in Yellow
Advertisement:

A horror trope which has become something of a Dead Horse Trope, as it's now almost always played for comedy. It involves a character seeing an ugly face and begin pulling at it, on the assumption that it's a mask. Of course, it's actually someone's face and the puller will typically be Horror Struck. Sometimes a purely comedic variation will occur with wigs if the joke is that a woman looks like a man. Also closely related to "I'm not pregnant, I'm just obese" jokes. Compare with Your Costume Needs Work, For Halloween, I Am Going as Myself, Mistaken for Fake Hair and Not a Zombie. Can be a result of the monster being Mistaken for an Imposter.

The Simpsons: Mr. Burns is Not a Mask

Chief Wiggum must have been watching a lot of "Mission: Impossible" or Scooby-Doo lately...

The Simpsons: Mr. Burns is Not a Mask

Chief Wiggum must have been watching a lot of "Mission: Impossible" or Scooby-Doo lately...