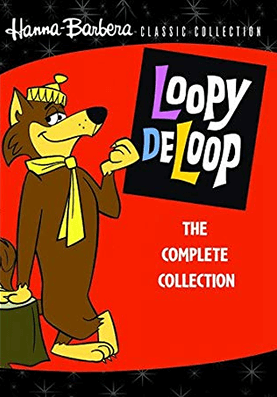 Loopy De Loop was a theatrical series of cartoons produced by Hanna-Barbera starting in 1959 all the way through 1965. While the men behind the company had plenty of experience in theatrical cartoons, as they cut their teeth on Tom and Jerry among others, Loopy was the only one of his kind from the studio itself, released theatrically by Columbia Pictures (who partially funded the series and was H-B's partner studio for much of this timeframe).

Loopy De Loop featured adventures of the titular character. A French Canadian wolf that is just trying to make his way in the world. And unfortunately for "ze good wolf", Hilarity Ensues.