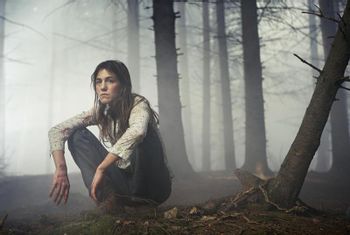 "You're leaving me!"
"Chaos... reigns."
Advertisement:

Imagine what a film co-directed by the Stanley Kubrick who made The Shining, the David Lynch who made Eraserhead and the Andrei Tarkovsky who made Stalker could look like, and you're getting close to the idea of what Antichrist is.

The film centers around "He" and "She" (Willem Dafoe and Charlotte Gainsbourg, respectively) attempting to deal with the grief surrounding the death of their infant son, Nic. He, a psychologist, proposes exposure therapy at their cabin in the woods appropriately called "Eden", due to skepticism surrounding traditional medication-based treatment. Things go From Bad to Worse. Much, much worse...

The movie started a heated controversy during its premiere at the 2009 Cannes Film Festival, with most critics praising the film for its technological accomplishments, while bitterly divided over its merits or lack thereof. Many detractors accused the movie of being deeply misogynistic as well as artless euroshlock. Not helping was Von Trier (facetiously, we hope) declaring himself the "best director in the world" and Gainsbourg winning Best Actress.

The film was the first of Von Trier's "depression" trilogy, followed by Melancholia and Nymphomaniac.

For the similarly-named trope, see The Antichrist.