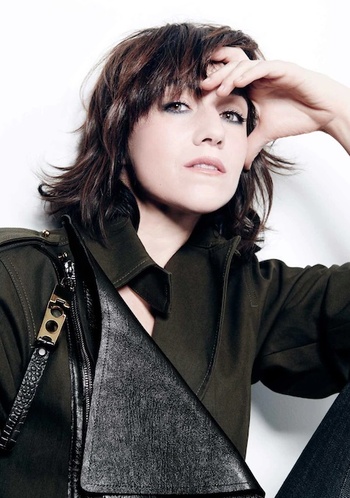 "The more sincere I could be, the better it would be for the film."
Advertisement:

She has been active since 1984, and she has consistently played roles in indie / artsy films ever since, be they French or international productions, working with renowned directors such as Agnès Varda, Claude Miller, Alejandro González Iñárritu and Lars von Trier.

She first attracted mainstream attention when she was 12, appearing alongside her father, singer and songwiter Serge Gainsbourg, in a highly controversial music clip titled "Lemon Incest", in 1984. Her first album was written by her father, and she gave up singing after his death in 1991, but eventually decided to come back in that field in 2006.

Her mother is Jane Birkin, she has two half-sisters on her mother's side, the late photographer Kate Barry (daughter of John Barry) and actress Lou Doillon (daughter of director Jacques Doillon); and two half-brothers on her father's side, Paul and Lucien Gainsbourg. Lucien is a composer and pianist.

She's the partner of French-Israeli actor and director Yvan Attal since 1991. Attal proposed to her in 2013, but no marriage ensued. They have three children together.

In 2021, she released her directorial debut Jane By Charlotte, a documentary about her mother.