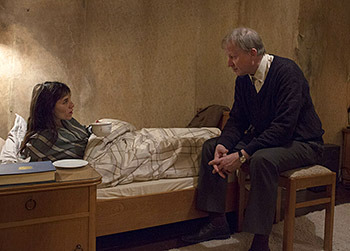 Being the third and final installment of Lars Von Trier's "Depression" Trilogy (after Antichrist and Melancholia), the 2014 film Nymphomaniac is a bleak story of utter emotional misery. So what else is new, right?

The film has two starting points, both starting as a Downer Beginning and life going downhill from there. In the narrative starting point, the story starts as Seligman finds Joe beaten and bleeding in an alley. In the chronological starting point, the story starts with Joe levitating up in the air as she receives a vision from the Whore of Babylon herself. This demonic possession turns Joe's sexuality self-destructive as well as harmful to others. However, it is up to the audience to decide whether the demonic possession is literal (supernatural), delusional (mental illness) or metaphorical... Or simply Joe trying to mess with Seligman's head.

Nymphomaniac came out of the editing room at five-and-a-half hours in running length. The studio worked with the film editors to cut the film down to four hours, and released it as two two-hour movies, two weeks apart. The complete Director's Cut had its general release world premiere in Copenhagen in September 2014, adding roughly 90 minutes of footage, expanding some of the subplots.