Film / I'm Not There 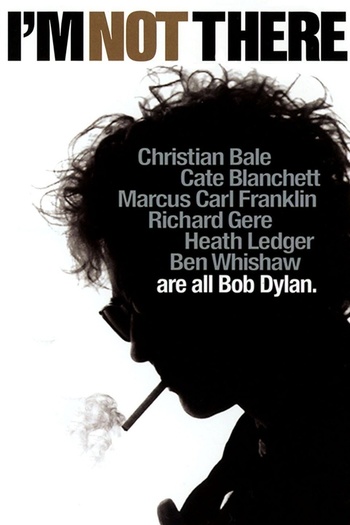 Confused yet?
"People are always talking about freedom. Freedom to live a certain way, without being kicked around. Course the more you live a certain way, the less it feels like freedom. Me, uhm, I can change during the course of a day. I wake and I'm one person, when I go to sleep I know for certain I'm somebody else. I don't know who I am most of the time. It's like you got yesterday, today and tomorrow all in the same room. There's no telling what can happen."
— Billy the Kid (Closing Narration)
Advertisement:

I'm Not There is a 2007 biopic—sort of—based on the life and different personae of Bob Dylan. Directed by Todd Haynes, the film uses six different actors (one of whom is a woman) to portray him; all playing Dylan at different roles in his life.